The base overlay is included in the PYNQ image for the PYNQ-ZU board. The purpose of the base overlay design is to allow PYNQ to use peripherals on a board out-of-the-box. The design includes hardware IP to control peripherals on the target board, and connects these IP blocks to the Zynq PS.

The base overlay on PYNQ-PU includes IP to connect to the following hardware:

Example notebooks are included in the <Jupyter Dashboard>/base/video directory on the board and show how to use the HDMI and MIPI interfaces.

The PYNQ-ZU has dual-stacked HDMI in and HDMI out ports. The HDMI interfaces are connected to a HDMI PHY that supports up to 4K resolutions.

The HDMI IP is connected to PS DRAM. Video can be streamed from the HDMI in to memory, and from memory to HDMI out. This allows processing of video data from python, or writing an image or Video stream from Python to the HDMI out.

Note that while Jupyter notebook supports embedded video, video captured from the HDMI will be in raw format and would not be suitable for playback in a notebook without appropriate encoding.

The HDMI in IP can capture standard HDMI resolutions. After a HDMI source has been connected, and the HDMI controller for the IP is started, it will automatically detect the incoming data. The resolution can be read from the HDMI Python class, and the image data can be streamed to the PS DRAM.

The HDMI out IP supports the following resolutions:

Data can be streamed from the PS DRAM to the HDMI output. The HDMI Out controller contains framebuffers to allow for smooth display of video data.

The PYNQ-ZU has a MIPI (Mobile Industry Processor Interface) CSI (Camera Serial Interface) which is connected to a MIPI subsystem in the base overlay.

The PYNQ-ZU has a DisplayPort output which is connected to the PS which means that it is always available. It is not part of the Base overlay, but it can be used with the other interfaces and IP that are in the base overlay.

The PYNQ-ZU base overlay supports line in, and Headphones out/Mic. The audio source can be selected, either line-in or Mic, and the audio in to the board can be either recorded to file, or played out on the headphone output.

See the example notebook in the <Jupyter Dashboard>/base/trace directory on the board.

The Python API for the peripherals in the base overlay is covered in pynq libraries. Example notebooks are also provided on the board to show how to use the base overlay.

Rebuild the base overlay

The following steps describe how to rebuild the base overlay. You need to use Vivado 2020.2 to run these steps. It will not work with other versions of Vivado. As the precompiled design is already available in the PYNQ image for the board, you only need to do this if you want to study the design, or make a modification.

Get the source code

Add ZU board files to Vivado

Run the following Tcl commands in Vivado to download the latest PYNQ-ZU board files from the Xilinx board repository:

Build the HLS IP and the create the project

Some IP for the base design are provided as HLS files. The source is available in this repository. A Tcl script is provided to compile the source files (using Vivado HLS) and export them in IP-XACT format so that they can be used in Vivado.

The base overlay is a complicated design with a large number of IP blocks. The image below shows a view of the base design. You can click on this image to see a PDF version of the block design. This picture is only intending to show you a top level view of the level of complexity in the design, and not the detail of every IP. If you would like to explore the design in more detail, you can rebuild the design to this point, and check individual IP, and open various IP subsystems. 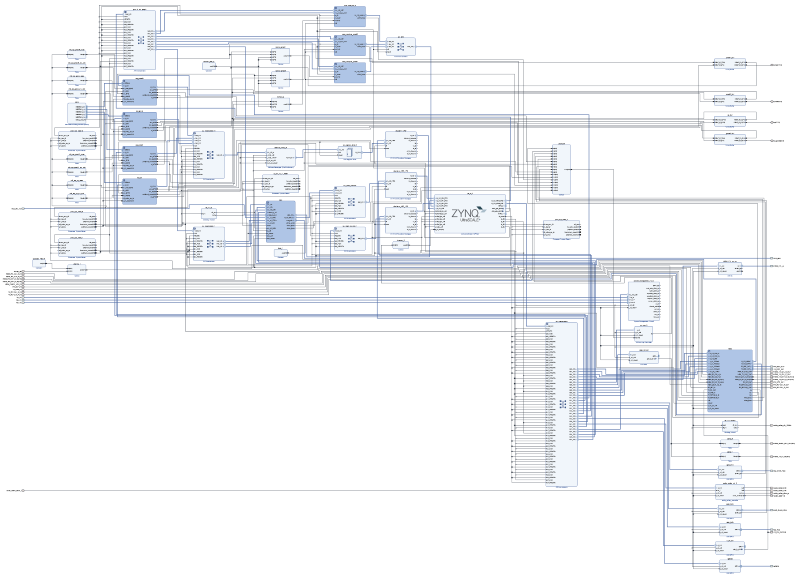 You can run the following commands to rebuilt the bitstream.

You can now review the block diagram.

Remember the precompiled bitstream is already loaded on your board, so you do not need to rebuild the bitstream unless you have changed something in the design.